Unleash your bravery in this battle royale 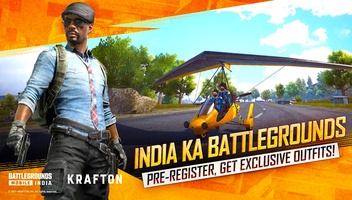 Advertisement
Battlegrounds Mobile India is an action and adventure game that transports you to an island full of players who are all trying to survive. After jumping out of an airplane and landing on the ground, you'll have to make your way all over a map that's brimming with enemies. At all times, you need to pay close attention and watch your back to make sure none of your rivals succeed in catching you by surprise.

With a typical battle royale gameplay, Battlegrounds Mobile India immerses you in countless events and tournaments to complete. You'll get to battle it out online against players from all over the world who all have the same goal in mind: to be the last survivor standing. Also, in some game modes, you can even create alliances that let you band together with other players and work as a team.

Visually speaking, BGMI (Battlegrounds Mobile India) has spectacular 3D graphics. Plus, the controls are perfectly adapted to touchscreens so you can easily use each weapon you find to attack your rivals. You'll find dozens of handguns, rifles and shotguns to use against your enemies during each round. Likewise, you'll also find bladed weapons and explosives that will also come in handy from time to time.

This new battle royale from the South Korean company KRAFTON, Inc. gives you the chance to experience exhilarating battles where your only chance of winning is to be the last survivor. Countless rivals will try to catch you by surprise as you progress on an island that's full of dangerous elements. However, you'll find plenty of vehicles and other elements to equip your character well-enough to be able to stand a chance against any opponent. You'll gradually get to explore every corner of a vast map that holds more dangers than it may seem at first. And who knows? You just might manage to sneak into the top positions of the game's global leaderboards.
Reviewed by Carlos Martínez
Advertisement

why the server is busy, I go through the FB